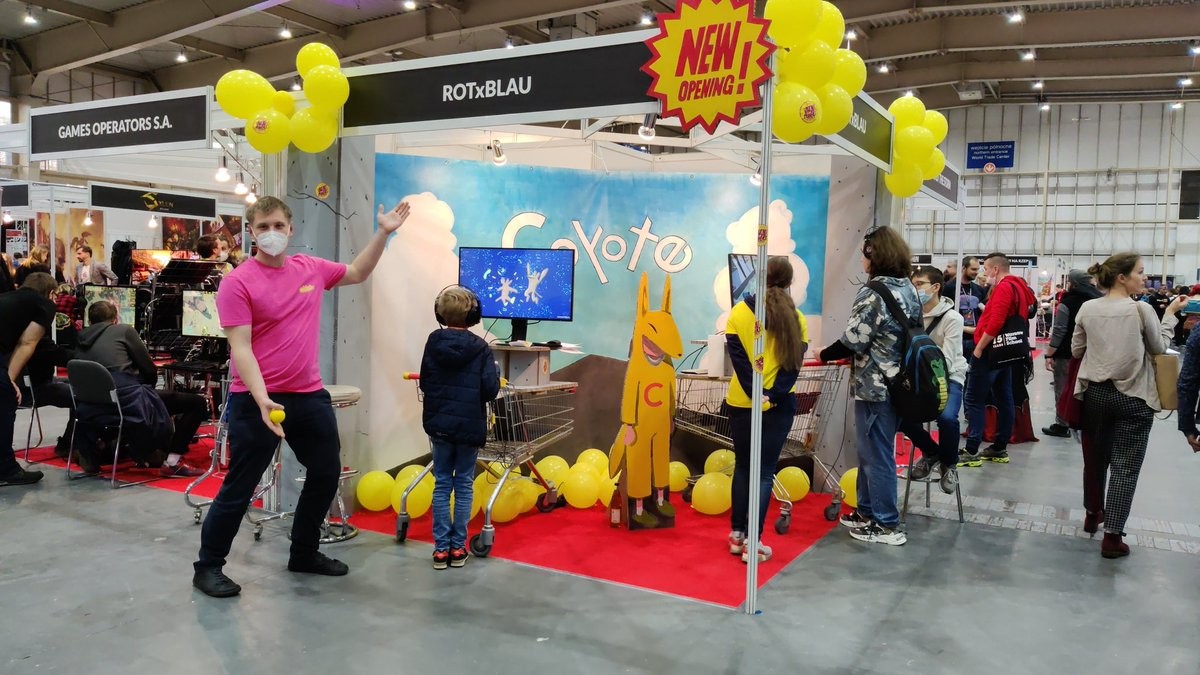 The decision to go to a trade fair would have been harder for us as a young indie studio if it hadn't been for the PGA. It was affordable (although all in all it cost us quite some money), the journey wasn't far and when André Bernhard aka "The Indie Advisor" gives his recommendation, there are no more reasonable arguments not to go. The crux: we needed a presentable Coyote version. It took a lot of work, nerves and torn deadlines to be satisfied enough. Zenker, freshly returned from his holiday/ business trip, fired up his delusion mode and cobbled together the fattest stand scenery just one night before our departure. The preparation had actually worked and yes Richard, I hear your admonishing "nyaaaaa....". All right, could have been smoother, next time. Micha, who stayed in Leipzig, didn't stop programming until the start of the fair to make the version nice and smooth.

So three loaded up and went by rented bus (storm, hour-long traffic jam shortly before Halle caused by a truck lying across, chilling on the side of the motorway) and three by train (storm, tree in the lines shortly after Berlin, return journey, took long-distance bus).

We arrived late in Poznań, but everything was fine. When Harry, Liv and I arrived by train, Zenker, Richard and Götz had already set up everything. Our stand was right next to the main stage, a location that would give us a decent crowd of interested people and abraded larynxes for the rest of the PGA (the stage was loud). On arrival, the fair presented itself primarily as a stretched out area with two large stages and colourful squares arranged at right angles to each other. There were highlights in the form of a truck, an off-road vehicle and a small yacht. These would have seemed more exciting, though, if they hadn't already been kind of expected. It was late, people were only present in the low double digits. They were unpacking fresh computers and typing things into already unpacked ones. The amount of stalls lined up, the wide space between them and the present silence already created an atmosphere of expectation. It was as if the hall had taken a deep breath before our arrival and was now waiting until the next morning to hyperventilate.

Fortunately for us, Richard had found accommodation that was only a fifteen minute walk from the venue. When I had seen the pictures of the accommodation beforehand, I was, to be honest, not very enthusiastic. I'm a left-wing compost heap and there was too much tile and not enough wood in the website photos for me. My mood didn't really improve much when the place turned out to be part of a high-rise complex, nestled in a carrée of functional traffic elements and uncharming botanical shaving.

However, my inner shame softened for the first time when we got into the lift and Götz pressed "14". All right, if it's a high-rise, let's get it right, fine. We opened the door to the flat and were pleasantly surprised. If a German public broadcaster would have produced "Wolf of Wallstreet", this would have been the setting. It had a window front, that is, the wall was a window. Poznań proved to be very handsome from above. The obvious fact that the small, but very chic place was now filled with a bunch of slobs, who first turned on the huge TV for a classical concert, completely pacified me. We had something to eat, did NOT drink another beer (the place hadn't sold any after ten) and slumbered blissfully.

The next day, Zenker, Götz and I took the first shift. I was getting nervous. I had been testing the game for the last few days and was unsure how it would be received. The hall had visibly changed. The first guests splashed into the hall and developers scurried around at all the stands. We were still setting up the technology, testing the game and I calmed down a bit. The build that Micha had finished the day before seemed to work well. When the first person came to our stand to play in the next breath, I didn't have much time to express my amazement about the suddenness of the start, because soon the next one came and we had a lot to do.

Finding design flaws in your own game at a trade fair reveals an advantage: you get the irrepressible will to eliminate them. Because ("no sorry, can not jump...") you find yourself in the hopeless situation ("if you want, you can skip this") of having to repeat every inconsistency and inconvenience ("you see, you FIRST have to choose the action like this and THEN choose your target like THIS") every time and with every new person ("you can find the goal of the mission if you follow the animation. The goal is written down there."). It was like a verbal assembly line work, if there were always unexpected things on the assembly line, or if the assembly line decided to change its pace from time to time.

The heterogeneous feedback from the players made us excited. It worked. There were people who were able to play through it almost without any hint, many enjoyed it and almost all found it innovative and new. We already knew it wasn't perfect yet, but how much potential it actually had was beginning to unfold in front of us. It was a good feeling.

In the early afternoon Liv, Harry and Richard came over to relieve us from our shift, they had already cooked. Our mashed brains reached the information with glee and our stiff limbs made it back to our flat for a rest. The quiet made me like the apartement even more and when I turned the lock in the loo and with a hearty crash it turned 45° more to the left than its blueprint intended, something like a gentle affection filled me. I know this kind of thing, yes it is as it should be, I can handle this, this really could make a home for the next 60 hours.

As we learned beforehand from a neighbouring booth, we should lock up all the technology in the evening after the end of the fair, because people will be drunk. So the three of us were motivated to get over with our meal and rest and walk back to the fair.

The composition of people had changed. There were no more guests, instead participants of the Game Industry Conference filled the hall, a conference which took place in another separate hall. We used the early time to drink free beer and make friends with the Studio Mooneye Indies from Hamburg by tapping into their wisdom. The stage was now used to proudly present the CEEGA or Central And Eastern European Game Awards (just roles of the tongue). As we weren't nominated our attention was eager, Cyberpunk won two of eight awards which seems fair. The point of the free beer first became clear when I met a couple of friendly developers from the Baltics in the queue and we spent the next half hour laughing. The meaning of the free beer reached its Olympus when the stage was unceremoniously transformed into a YouTube karaoke party. We dispersed into the mix and when we came back to the stage half an hour (an hour, two hours, I don't know) later, it was full of people singing their inner pop stars out of their limbs alongside the original performers who had enjoyed the grace of the microphone. The other half of the developers quoted their efforts with jubilant applause. We went blissfully to bed that night.

And woke up more or less blissfully, depending on how blissfully the person in question had spent the evening before. The hall had changed a bit towards Saturday. The amount of SWAT teams and soldiers, as well as elves, heroes and ninjas had increased strikingly. People were constantly posing everywhere. Our stand was well received. People who liked to cover themselves in fur or to shoot in the air with styrofoam guns seemed to find our stand congenial, we had something in common there. In the meantime, the work proved to get easier and more routine. We won some people for our game (greetings go out to YamishoWolf, Sanrokero and RedSkittleFox).

What we did NOT win, however, was one of the Indie Awards. But I'm getting ahead of myself here. We thought the party was the night before, but we found out to be totally wrong. The actual party took place on Saturday evening. We didn't really feel like partying any more. But the atmosphere at the beginning was relaxed, there was good food and free long drinks, the DJ turned out to be amazing. The conversations that evening were even better than the ones the night before, but I personally remembered fewer of them. I didn't know much about the developer community until then, but I am really beginning to like them. They proved to be interesting conversationalists with very diverse stories and a good dose of humour and a fable for clever things.

Oh yes, and there were the Indie Awards. We didn't get the award for best booth. Let's not talk about it. If we were talking about it, though, I'd say that decision was completely inane, but really, lets don't talk about it. Not at all. In fact, I'd say in my whole life I've never talked about any thing less than this one. Never.

Sunday had something peaceful and relaxed about it. The previously anonymous crowd had gained some confidentiality, the fear of sudden bugs had faded, we were no longer beginners and had gained more confidence in Coyote. The uncertainties around our game had been replaced by clear missions of what to change and to improve. During the time in Leipzig, Micha had contacted publishers from afar and we had also had corresponding conversations at the fair. We came back home with a bit more confidence and a lot of work. We are looking forward to chopping up the harvested fruits of knowledge and arranging them on our rolled out coyote dough. Gladly more of this.